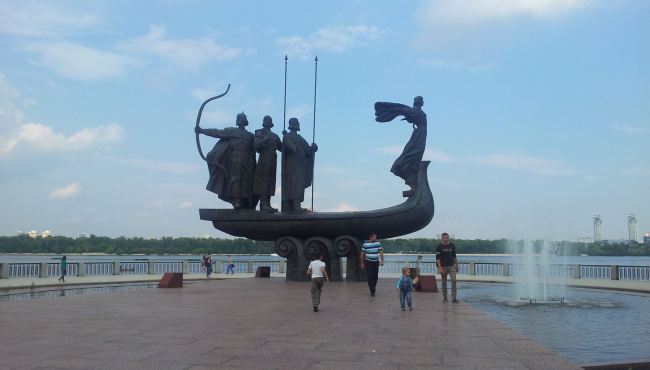 I moved to Kiev in August of 2013, and had no idea what to expect. The decision to move there wasn’t quite on a whim, but it was pretty close. I was at a time in my life where I felt like it would be a good time to travel and see the world. I was eager to look at international teaching jobs, but I was still just nervous enough that I didn’t want to do it on my own. One of my best friends was away teaching, and I asked her if she would join me in an adventure somewhere totally amazing and awesome.

The trouble was, by the time I asked her, she had already committed to a second year teaching at her current school in Kiev, Ukraine. To be honest, I didn’t even know that the capital city of Ukraine was named Kiev. The idea of going to teach there did not excite me nearly as much as more exotic locations such as the UK, Thailand…or anywhere else, really! However, my fear of striking out on my own led me to agree to submit my application to the same school that my friend worked at in Kiev. Before I knew it, I had accepted a two year contract at the British International School, Kiev.

I went into this adventure with limited travel experience. Travel details in the past had usually been sorted out by family members or friends. I will admit, I did very little to prepare for this new endeavor either. My friend assured me that it was a great place to live and work, and that it would be no problem to get out of the second year of the contract. At the time, I thought that was all I needed to know. In hindsight, I would certainly never do that again, but of course hindsight is 20/20.

After nine months of living in this amazing city I had done enough “field research” that I can now share what I have learned with others who are planning on traveling to Kiev. Here’s what I know:

The main language spoken throughout most of the capital city is Russian.

Most people are fluent in Ukrainian as well though. Most signage and things like menus are written using the Russian alphabet. You don’t really need to worry about learning Ukrainian phrases unless you are traveling to the west side of the country, to places like the beautiful Lyiv. Grocery shopping, no matter where you go, will likely pose a problem. You learn to rely heavily on the pictures on food packaging. 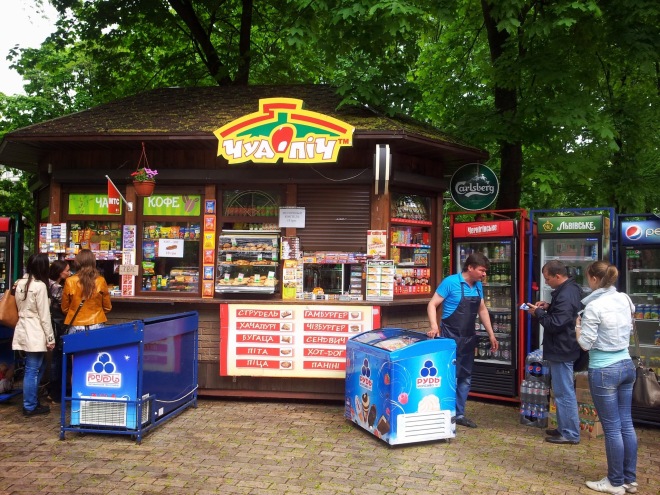 Kiev does have a tourist industry, but it is not as far advanced as other parts on Eastern Europe.

This means that many places outside the very center of the city don’t have English speaking staff or menus. Even those who do know English may be hesitant to speak it, out of lack of confidence or perhaps just to be difficult at times. This is not meant to discourage you from leaving the center, just to warn you that some awareness of the language would be helpful if you want to see all that the city has to offer.

The centre of the city remained largely in tact through all of the bombings that have taken place throughout its history.

This means that there is a lot of beautiful architecture to take in around Maidan (the city centre). Take some time to stroll along the cobblestone streets and through the many parks. 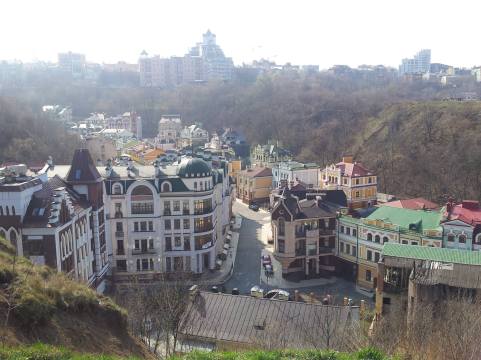 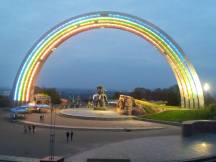 And you can’t mention Kiev without talking about the cathedrals

The beautiful onion domes (as my young cousin calls them) can take your breath away when you see them in person. Step inside to be truly amazed.

The transit system will get you where you need to go, but don’t be afraid to walk!

It didn’t take us long to realize that sometimes taking the metro can actually take longer than walking. By the time you go down, down, down underground on the escalators, wait for the train to come, make the stops, and then travel back to the surface, a twenty-minute walk could have gotten you to the same place, without having to go underground. Even better- you get to avoid playing the Kiev Metro game- how many people can be touching you at the same time? (the most we ever got was 6). This is a regular day on the metro in Kiev.

Because of the hilly landscape and deep river beds, the Kiev metro has some of the longest escalators in the world. One of them is actually the second longest in the world. So, seriously, it takes some time to get down and up at some of the stops.

It is so cheap! A token for the metro costs 2 UAH. Buses that run along the streets are usually around 1.50 UAH. Don’t forget to validate your bus tickets after you buy them from the old Ukrainian ladies on the buses!

Also, when you go to the ticket window to purchase a token for the metro, have your money out and ready. Just trust me on this one.

I didn’t know it then, but on what would be my third last morning in Kiev, I took a (long) walk to the Botanical Gardens. It was one of the most peaceful experiences I had while in Kiev. It was such a beautiful place to stroll around, breathing in the flower and tree-filled air. After awhile I settled down in a bench and read until I couldn’t bare to be in the sun any longer. 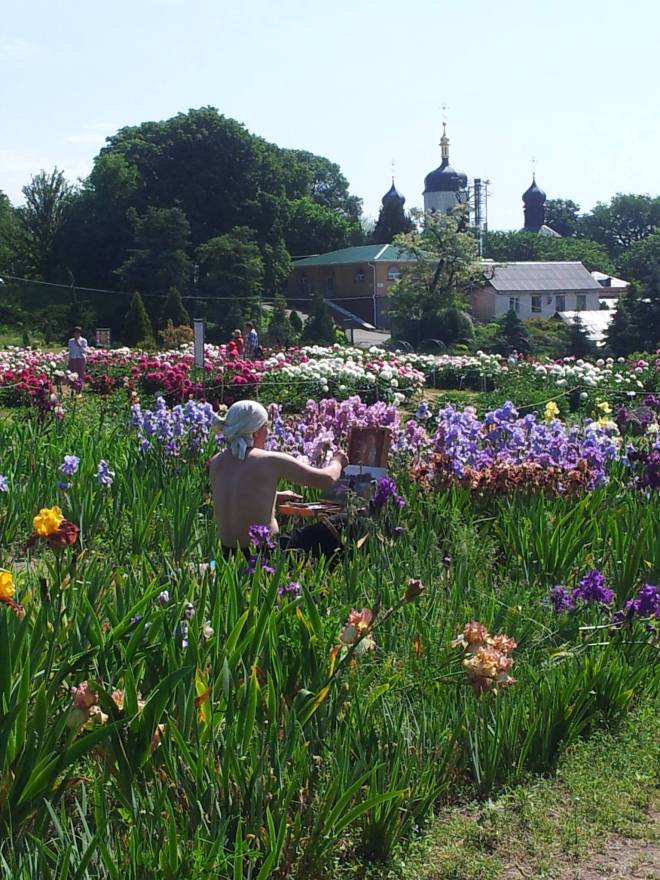 The Dnipr0 River provides endless opportunities to while away an afternoon.

Go here to see the locals. Couples gazing into each other’s eyes (or maybe doing more than that- public displays of affection are very common in Kiev), parents walking with their children, and men fishing together off the banks of the river. It was my favorite place to go and run. You can run (or walk) for kilometers on end, and you won’t get bored because when you’re not people watching, you can take in the sculptures and the street art. One time I even witnessed a group of mimes practicing! You never know what you’ll see along the Dnipro.

Not that I’m an expert, having never been to a ballet or an opera before, but while I was in Kiev I went to both Swan Lake and The Nutcracker and was blown away by the beauty of these performances. For only about 20UAH per ticket, you can’t go wrong here. 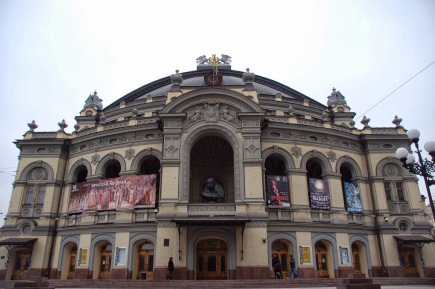 Buy from the markets!

In places like Androvski’s Descent, most of the merchants are able to speak enough English to make a deal. In other areas, such as outside of the metros, it is less likely that there will be English-speakers. Don’t let that stop you from buying their fresh produce or unique goods. Be brave- the worst that will happen is that they will giggle at your struggle to communicate. Or, maybe they will tell you (in Russian) to scram. Either way, once you walk away you will never have to worry about it again! 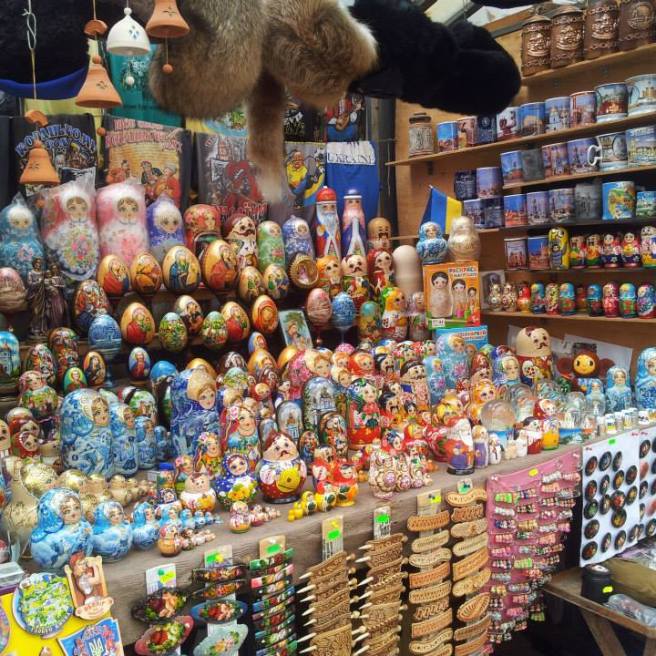 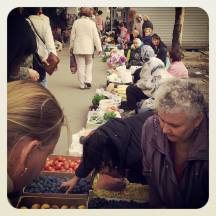 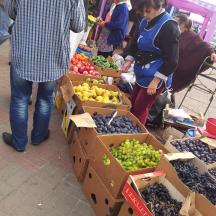 By all means, take a look at the main attractions of Kiev, but don’t forget to live like the locals.

You can’t leave Kiev without visiting places like St. Andrew’s Church, Androvsky’s Descent, Maidan Nezalezhnosti (the center square), the Lavra, and Kreschatyk Street. But the time I enjoyed most in Kiev was when I was doing “normal” things that the locals were doing. Hang out along the river. Go to a park. Sit in small pubs and take a guess at what you’re ordering.

This picture below was from what would end up being my last weekend in Kiev, and it is one of my most treasured memories of my time there. Even in the moment, I realized what a special day it was. We were surrounded by Ukrainians who were enjoying their Saturday’s with their families and friends. I think the beauty of the way most locals live in Kiev is that it is the simple life. Due to the political situation in the country, many Ukrainians don’t have much in the way of material things. To me, this is where the beauty comes in because you can sit and watch them interacting with each other, and they are filled with joy and love for one another. That to me is what makes a city, and its people, beautiful and why I would tell anyone to go to Kiev!

Stay tuned for more information on Kiev. I am lucky enough to get to return there in early 2016, and will be posting more specifics following that trip about what to do in Kiev, and where to eat (and drink) while you visit! Have any questions about the city? Comment below and I will do my best to find an answer for you.